In 2022 the Lithuanian city of Kaunas is European Capital of Culture, and the Andrei Sakharov Research Center (ASRC) at Vytautas Magnus University is planning a series of events that are part of the Cultural Capital program. They are also related to the Centennial of Andrei Sakharov and the 50th anniversary on May 15, 2022 of Romas Kalanta’s self-immolation of protesting the Soviet occupation of his country.

On May 13-14, the Twelfth International Sakharov Conference will be held in Kaunas with the theme Forgiving or Forgetting: Dealing with a Painful Past, during which an international group of experts will discuss several historical and relevant themes, including the reunification of Germany, the current deliberate distortion of history by the Russian authorities and the recent crackdown on Memorial, the Srebrenica massacre in 1995, and the psychological consequences of state repression in non-democratic former Soviet republics. The conference takes place on the eve of  the 50th anniversary of Romas Kalanta’s self-immolation, to be commemorated (please insert the exact date)

In May Kaunas will be the focus of the campaign ‘I am no Sakharov, but…”  It will demonstrate the view that anybody has a role to play in defending pluralist freedom and tolerance in society. Simultaneously, “Andrei Sakharov – Man of an Era”exhibition will be on view at the Vytautas Magnus University.

Throughout May “A Kaleidoscope of Opposition to Communist Rule”  exhibition will be held at the Military Museum in Kaunas located  in the city center by the main campus of the Vytautas Magnus University.  It will focus on the independent unofficial press as voice of freedom of thought and expression. . “A Kaleidoscope of Opposition to Communist Rule”  builds upon the October-November 2021 “Road to Freedom: Independent Publications in Occupied Lithuania and Abroad” exhibition 1 at the Mažvydas National Library in Vilnius. “Road to Freedom” contained examples of independent publications from all over the Soviet Union  printed in Vilnius in  1988-1990 by Petras Vaitiekunas, a  Sajudis activist and physicist. On display also were examples of earlier samizdat, exponents how samizdat was created and smuggled out of the country, and eventually smuggled back in small-size publications.

Rationale of the exhibition

The rationale of the exhibition is to remember and show how opposition to Communist rule was expressed, stimulated and maintained, and yet how the quest for freedom managed to stay alive against all odds.

For the younger generations born and grown up after the demise of Communist rule the exhibition will be a special encounter with the time when their parents were facing seemingly unchangeable limitations on their lives. It will also serve as a powerful reminder of the gross violation of fundamental civic and human rights guaranteed by the Soviet Constitution and the Covenants ratified by the USSR.

Finally, the exhibition gives a wider image of the opposition in the various countries.  the interest of the Soviet regime was not interested in allowing people in the USSR to know of the events  in Poland and Czechoslovakia. The name of Jan Palach rings a bell among the older generations in Western Europe but not here in Lithuania. Solidarność resulted in a lot of excitement and support in the West, but very few people in the USSR knew what was happening and even fewer were allowed to travel to Poland in order to prevent their “contamination”. However, Romas Kalanta, Sajudis, and the Lithuanian struggle for independence do not stand alone, they are part of a much wider and multifaceted process that led to the collapse of Soviet power and the disintegration of the Soviet empire.

Content The May 2022 exhibition will have four main components.

Production and smuggling of samizdat

This part of the exhibition brings together samizdat (a combination of sam/self and izdat/publish) from the archives of the ASRC with examples from other archives, e.g. the Research Center for Eastern Europe in Bremen. It shows how samizdat was created in the USSR and smuggled out of the country, printed abroad in small-size publications and then smuggled back into the country as “tamizdat” (a combination of tam/there and izdat/publish). It also shows magnitizdat (referring to magnitofon/tape-recorder), audio-taped unofficial songs of bards and singers like Galich, Okudzhava, Vysotsky, and Kim that were copied endlessly and disseminated from hand to hand.

Vilnius as a center for independent press

This part of the exhibition focuses more on the mostly unknown role of Petras Vaitiekunas, who in the course of several years printed literally hundreds of independent publications from all over the USSR and from as far away as South Sakhalin. The component shows unique original layouts of such publications, often in combination with the eventual end-product. We will also show some paintings Petras Vaitiekunas created before becoming an activist; these paintings have a unique style and color and show the spirit of the times when Lithuania embarked on the road to re-establish its independence.

As much as Romas Kalanta is a symbol of the Lithuanian struggle for freedom, Jan Palach is a symbol of the Czechoslovak opposition to the “normalization” imposed after the invasion of Czechoslovakia by Warsaw Pact troops in August 1968. Palach immolated himself in January 1969 protesting the invasion; he died several days later. Like in Kaunas, his death led to massive demonstrations in Prague following his funeral.

Jan Palach and Romas Kalanta are not the only persons who died from self-immolation protesting the regime. In Latvia Ilya Rips tried to immolate himself in 1969 in protesting the invasion into Czechoslovakia. However, he survived, was arrested and declared mentally ill (as Romas Kalanta was posthumously), and sent to a psychiatric hospital. After two years he was released and emigrated to Israel with his family.

The funeral of Palach turned into a major protest against the occupation. A month later another student, Jan Zajic, burned himself to death in the same place. This was followed in April of the same year by Evzen Plocek in Jihlava, among others. In Hungary Sandor Bauer immolated himself in January 1969 and Marton Moyzes in February 1970.

The first act of self-immolation took place in Poland by Ryszard Siwiec. His act was, however, successfully kept silent and became known only after the end of the Communist regime. Also the self-immolation of the Ukrainians Vasyl Makukh (November 1968) and Oleksa Hirnyk (January 1978) were kept hidden by the Soviet regime.

This part of the exhibition will show samizdat related to Jan Palach, such as photos, flyers and anthologies, as well as equipment  for production of independent publications  in Czechoslovakia.

Component Solidarność and the lifting of martial law

On December 13, 1981, General Jaruzelsky imposed martial law in Poland and thereby temporarily ended the freedom created by the existence of the Solidarność trade-union. The country was closed to the outside world, Solidarnosc leaders and other dissidents were arrested and interned, and martial law would restrict public life in Poland until its lifting in July 1983. The borders were opened only at the end of April 1982.

The period of martial law also resulted in a flurry of samizdat activity, not only involving independent publications, but also drawings, buttons, stickers and other means of voicing protest against the restrictions on freedom.

The exhibition will show examples of Polish samizdat, including the various “new ways” that helped keep the spirit alive and voice people’s opposition to the repressive regime. 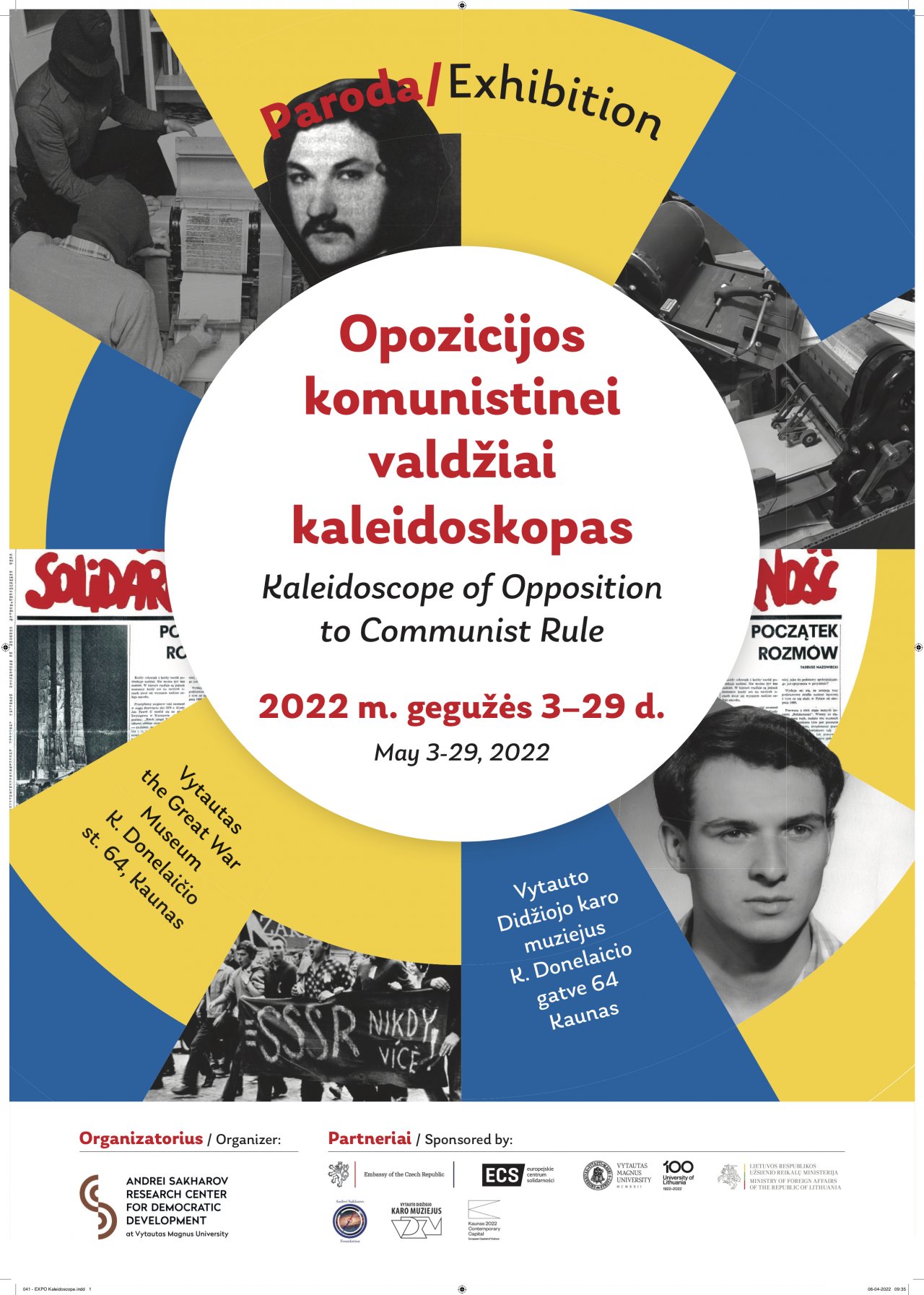