In the twentieth century history of the countries that until 1991 formed the Soviet Union no person carried a larger moral authority than Academician and Nobel Peace laureate Andrei Dmitrievich Sakharov. From being the youngest Academician ever in Soviet history, he developed into an undisputed leader of the human rights movement in the USSR, with an importance not only for his now non-existent country, but for the human rights movement across the globe.

His death on December 14, 1989, was an enormous blow to the democratic movement. No other person was respected so widely in society. His performance as a parliamentarian is still remembered as a unique page in the history of his country: a unique combination of an anti-politician with not one element of populism in his appearances yet at the same time drawing crowds because of his honesty, moral stance and perseverance to address injustice wherever and whenever he had the chance.

The collapse of the USSR, the end to democracy in Yeltsin’s Russia and the return to dictatorial rule under Vladimir Putin, resulted in the memory of Andrei Sakharov fading away, and the loss of understanding of the importance of both his personal example and the thoughts laid down in his writings.

Andrei Dmitrievich Sakharov stands for moral courage, intellectual freedom and putting human rights first. With new generations having grown up after Sakharov died, and a political situation in the former USSR that is characterizes at best as complex and volatile, it is time to return Andrei Sakharov to the public memory as an example of personal courage and a moral beacon to society. 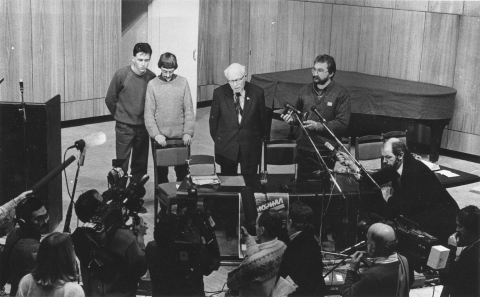 Andrei Sakharov was born on May 21, 1921, in Moscow (USSR) and revealed his talent for theoretical physics at an early age. He obtained his doctorate in 1945. From 1948 on, under the supervision of the Nobel Laureate Igor Tamm, he worked on the development of a Soviet hydrogen bomb. Sakharov believed it was important to break the American monopoly on nuclear weapons. But from the late 1950s on, he issued warnings against the consequences of the arms race, and in the 1960s and 1970s he voiced sharp criticism of the system of Soviet society, which in his opinion departed from fundamental human rights.

Andrei Sakharov, was awarded the Nobel Peace Prize in 1975 for his opposition to the abuse of power and his work for human rights. The leaders of the Soviet Union reacted with fury, and refused Sakharov permission to travel to Oslo to receive the Prize. His wife, Jelena Bonner, received it on his behalf. After receiving the prize, Sakharov continued to work for human rights and to make statements to the West through Western correspondents in Moscow.

Early in 1980, after he had denounced the Soviet invasion of Afghanistan, he was exiled to Gorky. In 1984, Elena Bonner joined him, also under sentence of exile. Isolated from family and friends, they continued to be persecuted by the KGB. Sakharov resorted to hunger strikes to secure medical treatment for Bonner, who was finally given permission to leave the Soviet Union for heart surgery in 1985. After Mikhail Gorbachev came to power with a policy of liberalization, they were freed and allowed to return to Moscow in 1986. Despite the measure of freedom now possible, which enabled him to take up a political role as an elected member of the Congress of the People's Deputies, Sakharov was critical of Gorbachev, insisting that the reforms should go much further. He died in Moscow on December 14, 1989.

For a more in-depth biography on Andrei Sakharov, please follow the link below.