“Building Bridges: Thoughts about the Other Russia"

In remembering the eminent thinker, philosopher, and beloved member of Vytautas Magnus University’s (VMU) community, professor Leonid Donskis, a second conference will be organized in his honor. This year’s conference, titled “Building Bridges: Thoughts about the Other Russia" will be held at the VMU Small Hall (S. Daukanto g. 28) on September 20th. The philosopher’s memory will be commemorated during a screening of a film "Russian Opposition", at the succeeding International Conference and throughout the evenings concert.

According to one of the conference organizers, Professor Robert Van Warren, head of VMU Andrei Sakharov's Center for Democratic Development Studies, the event will seek to bring attention to the need for distinguish between the Russia leadership and its people.

“Russia is our neighbor, so Russians are our neighbors. Sooner or later, Putin's regime will cease to exist and hopefully a brighter future appears on the horizon. It is necessary to build bridges, because without strong foundations it will be difficult to rebuild neighborly relations and restore a situation in which each other's integrity is respected. In addition, condemning a nation for the shortcomings of its leaders is not only short-sighted but unfair. Even if Putin is truly supported by the majority of the population. It is the result of Soviet, post-Soviet or re-Soviet thinking that’s effectively disseminated through the state propaganda machine – it is a fear that is instilled almost genetically through Stalinist terror and humanity's tendency to survive, " .

Organizers also emphasize that relying on black-and-white categorizations or simplistic images is dangerous, not only because it could lead to serious misunderstandings, but also because it overlooks Russian dissidents - those who dare to oppose the Kremlin's policies.

The conference program will be opened by a screening of the film "Russian Opposition" and a discussion in the VMU Small Hall. The film was produced by Russian filmmaker Evgeny Gindil and political scientist Cyril Rogov.

The event will be live streamed online. Attending the conference is free, but e-mail registration is recommended and can be accessed at: reservations@sakharovcenter.eu. Presentations will be read in Russian with English translation.

Following the conference, at 6:30 p.m., pianist Alexei Botvinov and writer Mikhail Shishkin will host a joint performance at the M.K. Ciurlionis National Museum of Art. Where piano music will be combined with a reading of letters by S. Prokofiev and D. Shostakovich. Participation will require guests to register beforehand, registration can be accessed at: registration@sakharovcenter.eu. 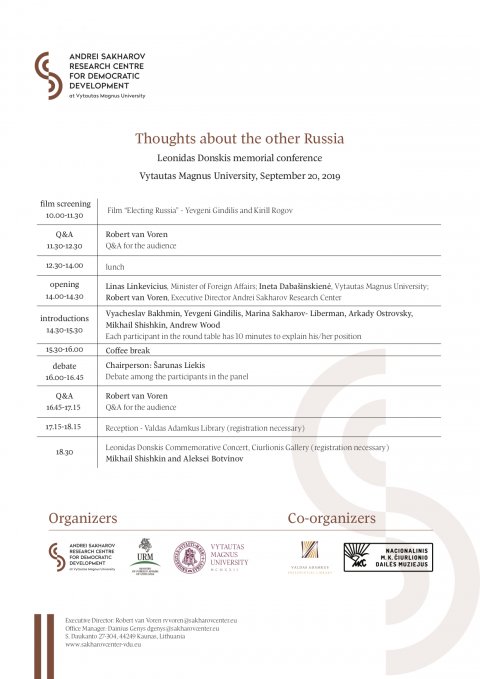 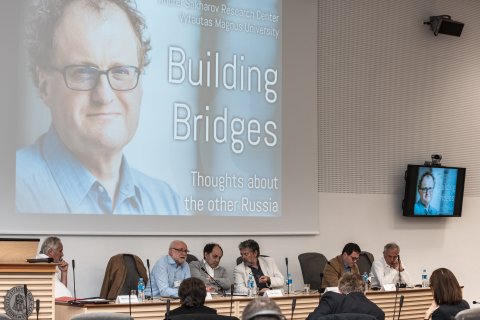