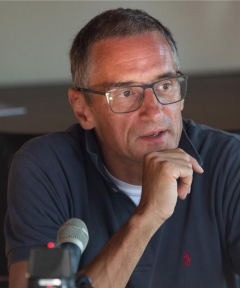 Sergei MEDVEDEV is Professor at the Free University in Moscow. Born in Moscow, he studied at the Moscow University, Charles University in Prague, and Columbia University in New York City, and holds a Ph.D. in history. In the past 25 years, he has held research positions and professorships in Russia, Germany, Italy and Finland. He specializes in political history, sociology and cultural studies.

Dr. Medvedev has written several books, including Mapping European Security After Kosovo (Manchester, 2002, with Peter van Ham). Russia and the West at the Millennium (Berlin, 2003) and Identity Politics in Wider Europe (Berlin, 2012). His most recent book on Putin’s Russia, The Return of the Russian Leviathan (Cambridge, Polity Press, 2019) has won the Pushkin House Book Prize as best English- language non-fiction book on Russia in 2020.