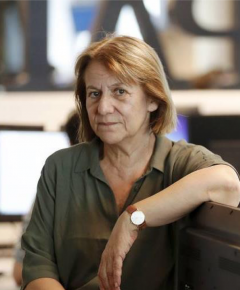 Pilar Bonet (Ibiza, Spain, 1952) is a free analyst and journalist writing for EL PAIS. From 2001 to 2020, she was correspondent of EL PAIS in Russia, Ukraine and other post Soviet countries.

She has travelled extensively in Russia, Ukraine, Belarus, Moldova, Georgia, Azerbaijan and Central Asia with special interest in frozen conflicts.

Bonet was distinguished in two occasions by the Association of the Foreign Press in Spain with the award to the best Spanish foreign correspondent (1990 for events in the USSR and 2014 for the coverage of the Ukraine events). Bonet has written several books on Russian subjects, among them “Figures in a Red Landscape”, Woodrow Wilson Center Press, 1993.
She graduated in Spanish Literature in Barcelona State University (1976) and in Journalism (1978) in Barcelona Autonomous University.