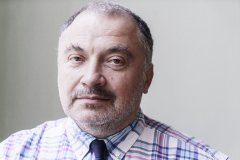 Nikolai Petrov is a senior research fellow at the Chatham House, Russia and Eurasia programme since 2019. Prior to this he served as professor at the political science department, National Research University Higher School of Economics, Moscow (2013-2021); a scholar in residence at the Carnegie Moscow Center, where he directed the Society and Regions project (1996-2013). He also heads the Center for Political-Geographic Research. He holds a PhD in geography from Moscow State University, 1982.

He is the author or editor of numerous publications dealing with analysis of Russia’s political regime, post-Soviet transformation, socioeconomic and political development of Russia’s regions, democratization, federalism, and elections, among other topics. His works include: From Constitution to Law: Implementing the 2020 Russian Constitutional Changes, Russian Politics, Volume 6 (2021), P. 130–152 (coauthored with Ben Noble); Russia’s Regime-on-the- Move // Russian Politics. 2019. Vol. 4. No. 2. P. 168-195 (coauthored with Henry Hale and Maria Lipman); Russia 2025: Scenarios for the Russian Future. (coedited with Maria Lipman), Palgrave Macmillan (2013), "The State of Russia: What Comes Next" (coedited with Maria Lipman). Basingstoke: Palgrave Macmillan, 2015.