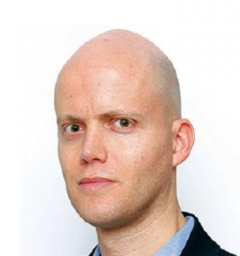 Jeroen Bult (1971) is a Dutch historian, specialized in Estonia, Latvia, Lithuania. Over the past years, he has published numerous articles on various topics related to the three republics, especially on Baltic-Russian and inter-Baltic relations, their wider historical/historiographic framework, minority- related and energy-related issues, but also on Germany and the EU. These have been published in/on Dutch magazines and websites like Elsevier (EW), De Groene Amsterdammer, the Clingendael Spectator (formally known as the Internationale Spectator, edited by the Clingendael Institute of International Relations in The Hague), Atlantisch Perspectief (edited by the Atlantic Council in The Hague), Raam op Rusland and in/on Estonian and Lithuanian newspapers, magazines and websites (like Postimees, ERR and LRT). He is currently working on a book on Estonia after the ‘Singing Revolution’, which deals with the country’s political and socio-economic development since the late 1980s and early 1990s. It should appear in 2022. He works by turns in Vilnius, Tallinn and the Netherlands. He intends to settle down in Vilnius permanently.