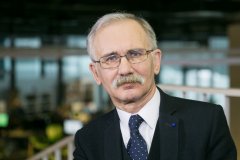 Egidijus Bičkauskas was born in Lithuania on 29 May 1955. He graduated from Vilnius High School No 7 in 1973 and from Vilnius State University with a degree in law in 1978. Having started out as an investigator with the Prosecutor’s Office of Vilnius City, from 1980 he specialised in very serious violent crime, corruption and bribery as an investigator of particularly important cases at the Prosecutor General’s Office of the Republic. The conscription into the Soviet army followed in 1984, with the service in the Far East of the Soviet Union lasting until 1986.

In 2000, Bičkauskas withdrew from active political life to focus on his duties at the Ministry of Foreign Affairs and the Prosecutor General’s Office of the Republic of Lithuania.
Since 2004, he has been engaged as a lawyer specialising in criminal law.
Bičkauskas is Secretary General of the Club of Signatories to the Act of Independence of Lithuania, author of a host of articles on political and legal matters, and frequent participant in various conferences.

Bičkauskas is married; his wife is a philologist and heads a department at the National Library.